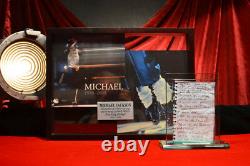 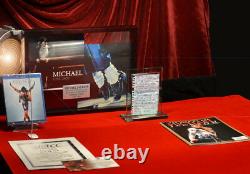 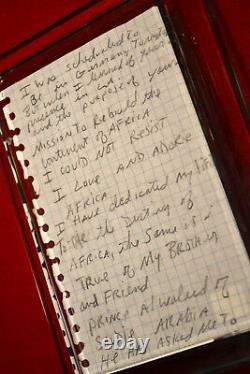 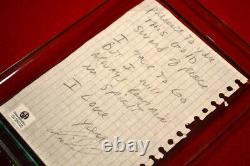 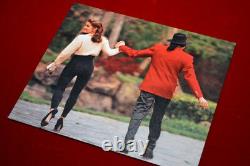 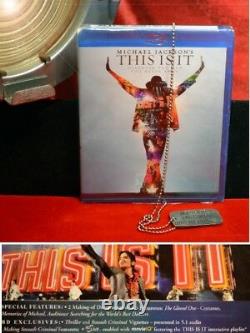 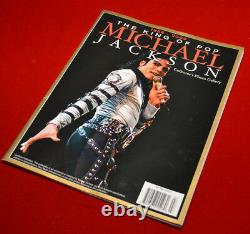 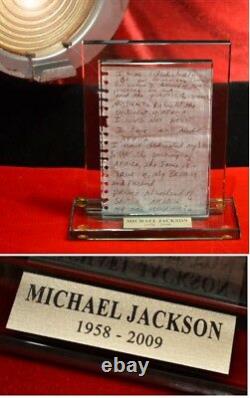 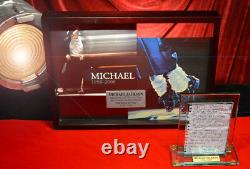 COA issued by GA LLC (Global Authentics) #GV550025. This Collection includes 2 Frames that make up this unique "One Of A Kind" Display... Perfect for a Home, Office or Museum. Factory sealed Blu Ray of "Michael Jackson THIS IS IT". Memorial Magazine filled with great photos of Michael Jackson. Metal Dog Tags and Chain that were only given out the audience of a MICHAEL JACKSON 1995 Television Special on HBO entitled "ONE NIGHT ONLY". Michael Jackson is a true Music success story.

This HAND-WRITTEN Letter was written in pencil by MICHAEL JACKSON to the SAUDI PRINCE where he placed it in his pocket of the custom made JACKET he wore when he married LISA MARIE PRESLEY on May 26, 1994 in the Dominican Republic... The Prince ultimately loaned his home in Las Vegas to the newlyweds. The note was found & removed from the jacket that he was wearing at his wedding ceremony. GAI then certified the hand written LETTER. And assigned it their Registration Number GV550025.

This VERY RARE Michael Jackson Collectible has been authenticated by world renowned GAI (Global Authentics) #GV550025... Global Authentics is one of the few recommended autograph authenticators that they recognize. The hand-written LETTER by Michael Jackson has been studied and believed to be 100% genuine. The last word on the letter is a rushed scribble, "Michael, " it cannot be guaranteed, although we found a couple of examples of that sig that are close in nature, but not close enough that we can say for certain that it is a match.

The rest of the LETTER, however, both front and back are absolutely genuine and guaranteed by UACC Registered Dealer #228 and Global Authentics, who applied their own seal to the bottom of the letter and assigned their registration number #GV 550025. This FRAMED EXHIBIT measures approximately 16" X 14" and comes in a Black double glass FRAME with color photos of Michael.. It has this ENGRAVED PLAQUE attached to the frame that reads. The LETTER DISPLAY is exhibited in double glass Frame & measures approximately 5" X 7"..

This very nice Autographed DISPLAY is just ready to display in your Home, Office, Media Room or Museum! You also receive this factory sealed Blu Ray DVD of this special release of MICHAEL JACKSON'S THIS IS IT. You also receive these original Metal Dog Tags and Chain that were only given out the audience of a MICHAEL JACKSON 1995 Television Special on HBO entitled ONE NIGHT ONLY. Finally, you get this great PHOTO Magazine of MICHAEL JACKSON'S life on and off the stage! A highly RARE piece of MICHAEL JACKSON that you rarely find in the marketplace.. This may be the only time in your life where you can own a piece of MICHAEL JACKSON memorabilia this valuable, a hand-written LETTER by Michael and left by him in the actual JACKET when he married to LISA MARIE PRESLEY in 1994. QUITE A FIND for the Discriminating COLLECTOR. This Very Rare ORIGINAL Hand-Writtten LETTER was written by MICHAEL in Pencil by the most famous entertainer in the world...

The 2 Page Letter is beautifully framed in this new double glass free standing piece with an engraved description PLAQUE.. That includes this Original COA (Certificate of Authenticity) from world renowned GA (Global Authentics) #GV 550025 that is guaranteed genuine for life by UACC Registered Dealer #228.

Hand-written LETTER written by this famous Grammy Winning Star! For the"MICHAEL JACKSON" Fan! As a TV & Movie DIRECTOR and a lifetime member of the Director's Guild of America, D. Michael Jackson, the sensationally gifted. Died tragically in Los Angeles... He had been childhood superstar, only to become the entertainment world's most influential singer and dancer before his life ended at his home at 50 years old. Jackson was popular music's premier all-around performer, a uniter of black and. Who shattered the race barrier on. Dominated the charts and dazzled even more on stage... Michael started with The JACKSON FIVE with Motown Records in the 1970's and they dominated the music charts with numerous hit songs! His 1982 album "Thriller, " which included the blockbuster hits "Beat It, ". He was perhaps the most exciting performer of his generation, known for his feverish, crotch-grabbing dance moves, his high-pitched voice punctuated with squeals andD titters. His single sequined glove and tight, military-style jacket were his signature trademarks. This one-of-a-kind framed Michael Jackson Hand-Written LETTER is just ready to display in your Media Room, Office or Museum! The original AUTOGRAPH has been stored in an acid free case in a smoke free, pet free environment. The condition of the Autograph is very good... Colors are bright and makes a nice overall good presentation. Check out our other auctions for more TV & Movie Collections that include other DISPLAYS & COLLECTIONS + other Wardrobes, Props, Art & Autographs.

Sell is a Registered Dealer with the U. We are proud that some of our memorabilia is on display in the SMITHSONIAN, Washington, D. Heimdell51 Praise: Great guy; very prompt & efficient service & exc. Packaging; got a free bonus too! Austinpowheinybeer Praise: GREAT GREAT GREAT!!

Toothfella Thanks for the super helmet Jack! Hope to do business again.

Jimsoden Praise: Great packing, good emails, very generous with his time and effort, class act!!! Circus10 Praise: Fabulous costume, vintage RBBB. Belfast Praise: Wonderful Ebayer & with genuine COA's too! THANKS TO THE OTHER 10,000 GREAT EBAYERS WE'VE HAD THE HONOR OF WORKING WITH FOR OVER 15 YEARS.... AND, WE LOOK FORWARD TO MEETING MANY MORE GREAT EBAYERS IN THE FUTURE FROM ALL OVER THE WORLD! If this autograph is declared not to be authentic, we may ask the purchaser to supply the full written opinion of one competent authority acceptable to us. This particular double Framed Collection includes an Original Hand-Written LETTER by the Legendary Star & Grammy Winner MICHAEL JACKSON he put in his JACKET on his wedding day to Lisa Marie Presley, Certificate of Authenticity (COA) that guarantees the MICHAEL JACKSON Letter genuine for life by world renowned GA (Global Authentics) #GV550025 & UACC Registered Dealer #228, 2 glass FRAMES with Engraved PLAQUES, a factory sealed Blu Ray DVD of "THIS IS IT" by Michael Jackson, Memorial Magazine filled with great photos of Michael Jackson, Metal Dog Tags and Chain that were only given out the audience of a MICHAEL JACKSON 1995 Television Special on HBO entitled ONE NIGHT ONLY. A GREAT piece of Music history.... A real "One of a Kind" Find & Conversation Pieces.... Music, Movie & Television Props & Autographs can make for a good investment as well!

Check out our other auctions for more great finds that include. Props, Costumes & Autographs for your favorite movies...

The seller is "jackmsell" and is located in New Port Richey, Florida. This item can be shipped worldwide.