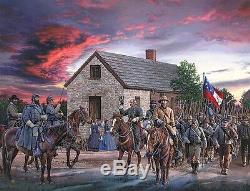 Jackson had been given what seemed to be an impossible task by General Robert E. The order was to engage three Federal Armies consisting of 52,000 soldiers in the Shenandoah, and prevent them from reinforcing US General McClellan's Peninsula campaign on Richmond. Lee closed his written orders to Jackson with the words, The blow wherever struck, must, to be successful, be sudden and heavy.

General Jackson and his force of 17,000 men, quietly broke camp in the dead of night on April 30th. For the next 48 days they would march 650 miles and win battles against Federal armies at McDowell and Front Royal, culminating in the defeat of US General Banks and his army at Winchester. As General Banks Federal army fled Winchester in disarray, Southern troops entered the city. From every street, the citizens of Winchester greeted the columns of Jackson's troops.

A North Carolina soldier said, As we passed through Winchester, the whole town seemed mad with delight, cheering us at every stop. General Jackson attempted to continue the pursuit of General Banks force, but his men were exhausted from the days of hard marching and the rigors of battle. In the last seven days Stonewall's men had tramped 100 miles and had been fighting for 30 hours straight. Ashby's cavalry to finish off the fleeing Federals, but Ashby could not be found. A brilliant scarlet sky seemed to punctuate the last moments of the unforgettable day, as General Jackson reviewed more of his soldiers arriving in town. A soldier from Ewell's division wrote: Yonder, in a gray coat, on Old Sorrel, came Stonewall himself, his eye bright with victory, his hair fluttering in the wind, the very cyclone of battle. The day had been one the town of Winchester and the great Stonewall Jackson would never forget. Also available in these formats. Remarques on Artist's Proof Giclee Paper Print Edition Only. John Paul Strain is now offering an Archival Paper Giclee edition in place of his lithographic paper prints. A Giclee's colors are brighter, last longer, and are higher-resolution. They have crisper details and the range of color for giclees is far beyond that of lithography. With only 200 in the edition, these archival paper giclees will be even more collectible. All Limited Edition prints are signed and numbered (S/N) by the artist and include a Certificate of Authenticity.

Rare objects are more valuable. An Artists Proof (AP), generally, is the first 10% of the Limited Edition prints that come off the press.

If the Limited Edition is 400 s/n, there would be 40 APs. This status is noted on the print. Collectors prefer APs because their value increases even more than a Limited Edition as time goes by. A remarque is a drawing done in the white border area of an art print.

The subject of the remarque is usually determined by the artist. Each remarque is a piece of original art which adds to the value of the print by making that particular print unique and exclusive from the rest of the prints in the edition. The term "giclee" denotes an elevation in printmaking technology. Images are generated from high resolution digital scans and printed with archival quality inks onto various substrates including canvas, fine art, and photo-base paper.

The giclee printing process provides better color accuracy than other means of reproduction. The quality of the giclee print rivals traditional silver-halide and gelatin printing processes and is commonly found in museums, art galleries, and photographic galleries. All Limited Edition artwork is subject to availability at time of order. The item "Scarlet Sky John Paul Strain Civil War Print Stonewall Jackson at Winchester" is in sale since Wednesday, May 7, 2014. This item is in the category "Art\Art Prints". The seller is "airplanesandmore" and is located in Flower Mound, Texas. This item can be shipped worldwide.
framedsignedautographedpaintingpatchpsadnablackraidersroyalsfedorawornjacksonbaseballpaniniravensrareautocardminioaklandlamarmichaeltoppshelmetsizeauthenticautographfullrookiejerseybecketthandfootballreggiephoto