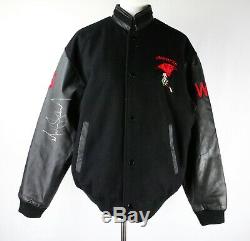 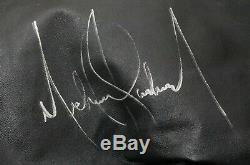 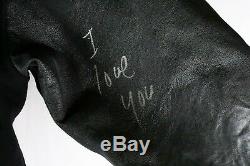 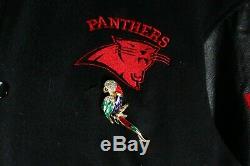 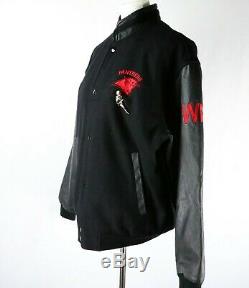 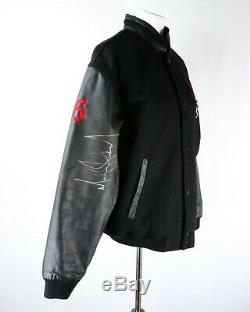 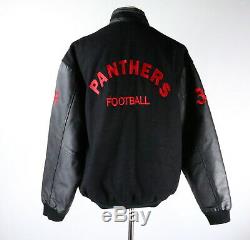 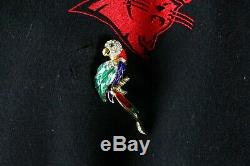 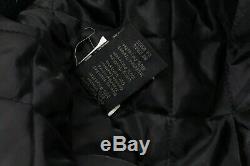 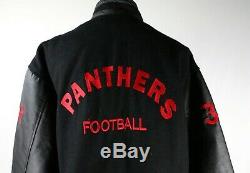 Michael Jackson's Personally Owned Panthers Football Jacket W/Vintage Parrot Brooch Signed in Mumbai, India 1996 W/Letter of Provenance - This black letterman style jacket was personally owned by the King of Pop, Michael Jackson. The black wool jacket with leather sleeves is decorated with red lettering reading "Panthers Football" across the back, the number "36" on the right sleeve and "WR" on the left.

The front of the jacket is also decorated with a red embroidered Panthers logo and has a vintage enamel and rhinestone parrot brooch attached directly underneath. The right sleeve is signed "Michael Jackson" and the left is signed "I love you". The jacket will be accompanied by a letter of provenance which states that the jacket was signed by Michael on October 30, 1996 in Mumbai, India at his hotel The Oberoi. Michael was in India to perform on his History World Tour on November 1, 1996. According to the letter, Michael signed the jacket for his butler who was serving him in the hotel and asked him for an autograph that he could give to his daughter.

My name is Richard Fossaas I started to collect Michael Jackson items back in 1988, Im born and raised in Norway. Over the last 30 years Ive been all over the world in the haunt for MJ items and bought EVERYTHING I have came across. My plan over the years has always been to create a Michael Jackson museum. In 2014, I moved to Miami, USA to continue this work.

In 2015 I got a business partner for the MJ project and we started to plan and promote the museum. Late 2016 I moved to Los Angeles to find a location for the museum. We found a spot at Hollywood Blvd that would have been perfect for MJ and the museum. The name would have been The Moonwalk Exhibition.

To that day I had managed to get around 30.000 items including a warehouse with vintage MJ merchandise we could sell at the museum. The museum store would have been filled with around 20.000 items and the museum it selfs with around 10.000 items. We had everything planned and designed for the location, including framing and displays for all the items... Authentication and working with MJs previous people, designers and managers, talking to family members etc. Even though the museum wouldnt have his name it would have been his items inside.

After contacting the Michael Jackson estate they said they would not support a museum, and if any case they would claim 80% of the gross income. This made it impossible for us to continue this project and 90% of these items will now be put for sale by me. If any questions feel free to ask, I know a lot of MJ fans are mad at me because I have vacuum the marked for items for years, but my intentions was good, it was so all the fans could enjoy them together at one place. The item "MICHAEL JACKSON WORN OWN SIGNED JACKET NO SHIRT GLOVE FEDORA" is in sale since Saturday, December 21, 2019.

This item is in the category "Entertainment Memorabilia\Music Memorabilia\Rock & Pop\Artists J\Jackson, Michael\Other Michael Jackson Mem". The seller is "bfossaas" and is located in Los Angeles, California. This item can be shipped worldwide.