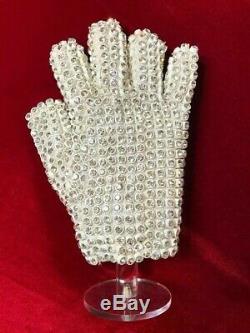 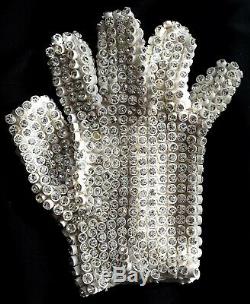 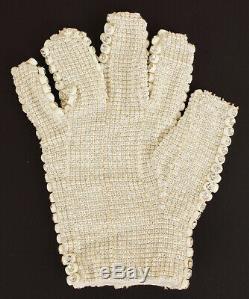 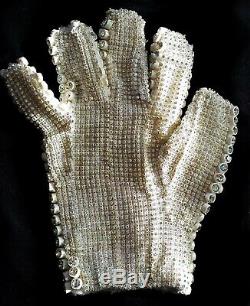 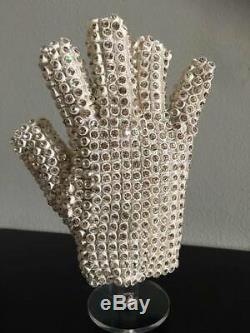 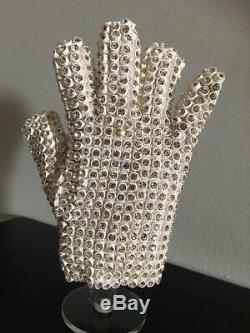 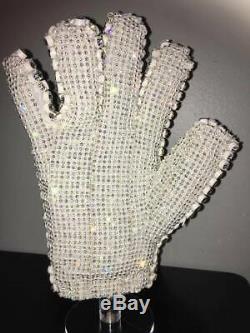 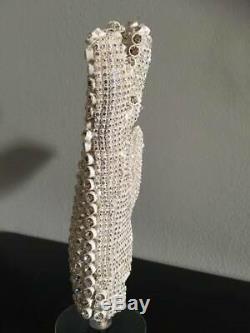 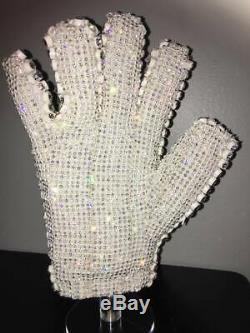 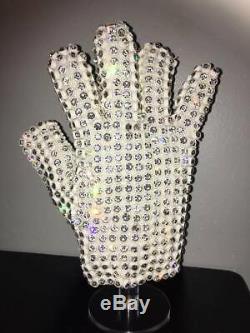 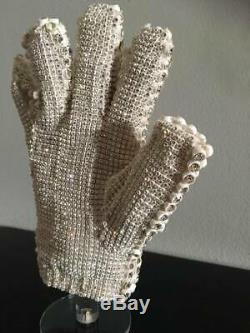 During Michael's Victory Tour he asked Mr. Whitten to design something for him that was different, unique and that no-one had done before.

Whitten then came up with the idea of a single glove, because Michael felt that wearing one glove was cool, but wearing two gloves seemed ordinary. These two gloves were then created, they were the first ones to be worn by Michael.

Each is a white glove with strips of Austrian Swarovski crystals of various sizes. Each glove took approximately 40 hours to set on the crystals and beading and a day to actually sew each glove together by hand. Both gloves were a prototype-tester glove, each of them is the only prototype left hand and right hand glove.

After these gloves were worn by Michael, it was decided later to use Loch-Rosen crystals which had a classier and more refined loot and feel. These gloves come from the personal collection of Keith Holman, of Holman Harper Designs. Keith worked with Bill Whitten in the 1980's who was his close friend and mentor. Keith worked as an assistant designer for Mr. Whitten and Artistic Hand Beading, and was responsible for making sure everything was on schedule, working direly with embroiders, beads, tailors and going to fittings. Holman had both of these gloves in his possession when he decided to restore them using the original banding. Comes with letters of authenticity from Keith Homan.

My name is Richard Fossaas I started to collect Michael Jackson items back in 1988, Im born and raised in Norway. Over the last 30 years Ive been all over the world in the hunt for MJ items and bought EVERYTHING I have came across. My plan over the years has always been to create a Michael Jackson museum.

To that day I had managed to get around 30.000 items including a warehouse with vintage MJ merchandise we could sell at the museum. The museum store would have been filled with around 20.000 items and the museum it selfs with around 10.000 items. We had everything planned and designed for the location, including framing and displays for all the items... Authentication and working with MJs previous people, designers and managers, talking to family members etc. Even though the museum wouldnt have his name it would have been his items inside. After contacting the Michael Jackson estate they said they would not support a museum, and if any case they would claim 80% of the gross income. This made it impossible for us to continue this project and 90% of these items will now be put for sale by me. If any questions feel free to ask, I know a lot of MJ fans are mad at me because I have vacuum the marked for items for years, but my intentions was good, it was so all the fans could enjoy them together at one place. The item "MICHAEL JACKSON OWN WORN OWNED RIGHT GLOVE FROM VICTORY ERA NO FEDORA SIGNED" is in sale since Friday, January 10, 2020. This item is in the category "Entertainment Memorabilia\Music Memorabilia\Rock & Pop\Artists J\Jackson, Michael\Other Michael Jackson Mem". The seller is "us2014-fossa" and is located in Los Angeles, California.