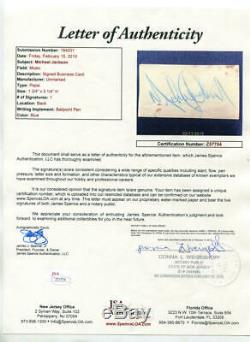 Michael Jackson 1980's Signed Pepsi Business Card, JSA. This is a rare, early-style Michael Jackson signature from the 1980's. Jackson's autograph is more elaborate and noticeably different from his shorter/quick signatures in the 1990s-2000s.

Jackson made iconic commercials for Pepsi in the 1980's, and this business card comes from a Vice-President (who's name has since been redacted). The business card is 1.75 inches by 3.25 inches. Who could forget the infamous incident where Michael set his hair on fire while filming an ad for Pepsi?

JSA" is in sale since Thursday, May 23, 2019. This item is in the category "Entertainment Memorabilia\Autographs-Original\Other Original Autographs".