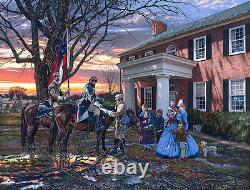 A native Southerner born in Nashville, Tennessee, John Paul Strain has studied American History and the War Between the States in particular practically all of his life. He received his formal training at BYU, polished his professional techniques as an illustrator for the U. Department of Energy, and soon afterwards entered the field of historical fine art, prints and posters. His work met immediate success and was showcased at a premiere gallery in the Rocky Mountains. Acclaimed for his paintings of the Old West, he eventually moved to Texas to work full time in the field of historical art. His early art, prints and posters depicting Civil War subjects produced the same enthusiastic response as his Western Art, and in the 1980s John Paul Strain began to concentrate on the Civil War. Few artists in the field have gained such widespread popularity so quickly. His art, prints and posters are now acclaimed among collectors, who prize his studies of Lee, Jackson, Forrest and other Civil War leaders, as well as his scenes of conflict and pageantry. His distinctive artistic style, which combines bright colors and contrasting shadows, and his devotion to historic authenticity have dramatically increased his popularity. Today, his original art is displayed throughout America and among collectors of fine art limited-edition Civil War prints. Artist John Paul Strain has become an American favorite. "Evening Orders in Strasburg" John Paul Strain S/N Limited E dition Giclee Print. Stonewall Jackson & Captain Abram Spengler. Spengler Hall - Strasburg, Virginia - March 22, 1862. "I have only to say, that if the valley is lost Virginia is lost", were the words of General Stonewall Jackson in the winter of 1862.

Explaining his strategy and intent to his officers Jackson declared, War means fighting! The business of a soldier is to fight. Armies are not called out to dig trenches, to throw up breastworks, live in camps, but to find the enemy, and strike him; to invade his country, and do him all possible damage in the shortest possible time. But Jackson's first task was to deal with the Federal armies that had invaded his country.

Banks and his army of 40,000 men were threatening Winchester from three directions. With only 3600 soldiers ready to oppose the huge force, Jackson moved his men and supplies to Strasburg. General Jackson would choose the ground on which to attack his enemy, but his troops were insufficiently drilled and unprepared for such a daunting task. Consolidating his forces in the Woodstock-Mt. Jackson region, General Jackson readied his army.

Believing the Confederates had been pushed out of the valley and were no longer a threat, US General George B. McClellan ordered Banks to leave a few regiments in Winchester and post the bulk of his army to the Manassas Gap Railroad Bridge. Jackson soon received reports of the Federal army heading north and knew Bank's army had been recalled to aid in McClellan's invasion of the Virginia peninsula to attack Richmond. Ready or not Jackson ordered his army north to engage the enemy.

At dawn on March 22 with sheets of rain blowing down the pike, General Stonewall Jackson and his army headed north at the route step. Despite the raw windy day and deep mud, the men made 27 miles and camped around Strasburg. In the evening of the first day's march at Spengler Hall, General Jackson issued orders to one of his officers of the Stonewall Brigade, Captain Abram Spengler, to be ready to accelerate their march at dawn, and arrive in Winchester the next evening ready to fight. Stonewall's operations during the next three months would make his name a household word. The Valley Campaign had begun. Also available in these formats. Remarques on Artist Proof Giclee Paper Print Edition Only. All Limited Edition prints are signed and numbered (S/N) by the artist and include a Certificate of Authenticity. Limited Edition prints are restricted to a certain number. For example, if 400 prints are made from an original painting, once theyre gone, thats it. There is no limit to the number of open edition prints of a particular painting.

Thats why Limited Edition prints are more expensive and more valuable to collectors than "open" edition. Rare objects are more valuable. The term "giclee" denotes an elevation in printmaking technology.

Images are generated from high resolution digital scans and printed with archival quality inks onto various substrates including canvas, fine art, and photo-base paper. The giclee printing process provides better color accuracy than other means of reproduction. The quality of the giclee print rivals traditional silver-halide and gelatin printing processes and is commonly found in museums, art galleries, and photographic galleries. An Artists Proof (AP), generally, is the first 10% of the Limited Edition prints that come off the press. If the Limited Edition is 400 s/n, there would be 40 APs.

This status is noted on the print. Collectors prefer APs because their value increases even more than a Limited Edition as time goes by. A remarque is a drawing done in the white border area of an art print.

The subject of the remarque is usually determined by the artist. Each remarque is a piece of original art which adds to the value of the print by making that particular print unique and exclusive from the rest of the prints in the edition. All Limited Edition artwork is subject to availability at time of order.