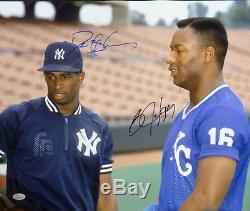 Autographed Goal Line Art Cards. BO JACKSON & DEION SANDERS AUTOGRAPHED ROYALS/YANKEES 16X20 PHOTO 11764 JSA. This is a 16x20 photo that was personally autographed by Bo Jackson & Deion Sanders. Bo was elected the Heisman winner for his 1786 rushing yards and 6.4 yards per rush during the 1985 season. He then starred with both the Los Angeles Raiders and the Kansas City Royals earning all-star status in both leagues becoming the first athlete to do so. Deion played just one year, 1994, with the 49ers he was named the AP Defensive Player of the Year and helped the 49ers to a Super Bowl championship.

Please view all pictures of items prior to purchasing item so you will have a good idea of what to expect. Please use our CONTACT FORM.